Helping Kids Cope with Moving to a New House 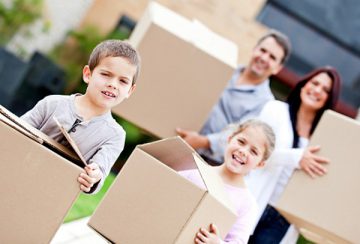 Moving house can be an overwhelming experience for a child. Most children are reticent to move as it creates feelings of instability. These top tips will help you make it an easier process for everyone concerned.

Don’t berate your children for ‘living in the past’ and don’t expect them to ‘grow up’. You will have had a lot longer to think about and process the idea of this move than your children will have had, and decision factors such as finance or the commute to work aren’t really important to them, which makes it harder for children to see the benefits of moving. Allow them to grieve for their old home in their own way and don’t rush them into accepting the new one.

Every aspect of unpacking (well, apart from plugging in the kettle!) can be done later, so getting your child’s new bedroom up and running should be a priority. Having familiar furniture, toys and books all there when they come home from school to their new home will help enormously with the settling in process. Part of why children struggle with moving to a new house is a feeling of the complete lack of control over the matter. So, you should also allow them to make some decisions in the moving process, such as picking a new bed, sheets or curtains for their room.

The best way to help kids adapt to the idea of moving is to keep everything running as smoothly as possible. That means appointing a reputable removal firm such as Gallagher’s Removals and making sure that you return all paperwork to various parties asap. If the move is making you stressed, try not to let the tension show in front of the children.

As with every aspect of parenting, a little bit of patience goes a long way when it comes to helping kids cope with moving to a new house!


or get a free quote online todayGet a free Quote